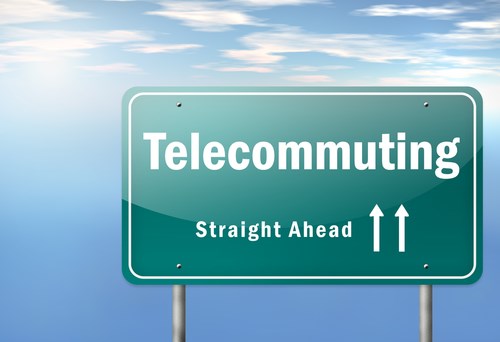 When the possibility of working from home (telecommuting) first appeared on the employment scene, no one really knew how (or if) it was going to work. It was initially hailed as a panacea for everything from traffic congestion to air pollution. Woody Leonhard, in his book, The Underground Guide to Telecommuting coined the phrase "work is something you do, not something you travel to".

Employing remote workers has advantages that advocates are quick to point out. Cost reduction is a big one, whereas the need for dedicated office space or cubicles is eliminated. This reduces the size of the businesses' physical foot print, thus lowering heating and cooling costs, cafeteria needs, on-premises IT support, etc.

In the winter of 2016, Federal employees in Washington who worked from home during the four official snow days saved the government an estimated $32 million dollars, according to Kate Lister, president of Global Workplace Analytics, and its research arm Telework Research Network. This did not go unnoticed. In fact, some estimates suggest that full-time telework can save companies approximately $20,000 per employee.

The New York Times recently reported that in 2016, 43% of employed Americans said they spent at least some time working remotely. That represents a 4% point increase from 2012. A Gallop report stated that "Employees are pushing companies to break down the long-established structures and policies that traditionally have influenced their workdays".

Studies show that remote workers are more productive, often putting in greater hours then their "in-house" counterparts. However, to say it increases productivity may be inaccurate. Merriam Webster defines productivity in terms of the output of an employee in a specific period of time. If employees are being more productive because they are checking email, returning calls and writing reports outside of the prescribed 40 hour work week, is it really an increase in productivity?

If asked, many people would probably identify a typical telecommuter as someone in their 20s, or a mother with small children. This isn't even close. The typical telecommuter is a 49-year-old college graduate — man or woman — who earns about $58,000 a year and belongs to a company with more than 100 employees, according to numbers culled from the Census Bureau’s annual American Community Survey.

The advantages, to the company and the employees, of remote working are well documented.

Melanie Pinola, a NY-based writer with Zapier, (a web-based service that allows end users to integrate the web applications they use), recently published a survey of the seven biggest remote work challenges (from the remote worker perspective).

From the employers' perspective, the disadvantages of utilizing remote workers can include:

Obviously not all jobs can be done from home. However, with the rapid advance of technological solutions, it is becoming easier to work from home and remain, or even increase your productivity. Any organization that is thinkg of going down this path must have robust systems, procedures, and support in place to ensure a successful outcome for everyone. If you would like to explore this further, our professionals at ASN would be happy to assist you.